We spent last week at Silver Lake, reconnecting with Angela’s extended family at the  93rd Annual Van Velzor Family Reunion. We swam in Lake Michigan (a lot!), played games with family, hiked over the dunes, and really enjoyed the break from biking. It was a tremendous week, and it ended much too soon. One more highlight from the week was on our last day there, when Joshua and Elise were baptized. It seems we are always away from Chicago when our church does its large baptism service, so we thought we would have our own. As a family we discussed the meaning of baptism, then Jeff baptized them both in Lake Michigan. 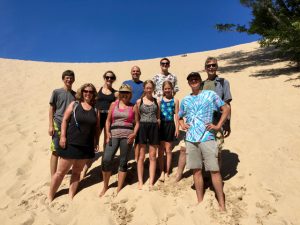 Posing for a hike before hiking the dunes with Angela’s uncle Tom, aunt Sally, and cousins Sophie, Jake, and Zach

The hike took us from Silver Lake to Lake Michigan (in the distance). It was a blast! 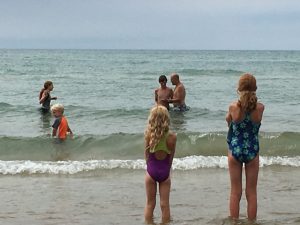 It was time to climb back on our bikes to begin the final stretch to Chicago. There was a threat of rain on the morning of our departure, so Angela’s grandmother let us all cram into her cottage so we—and all of our gear—would stay dry. We were so grateful not only to sleep in beds, but also to wake up in the morning and see that we had missed a thunderstorm.

As you can imagine, at this point various kids (and parents) are beginning to talk about home with a sense of longing, especially for comfortable beds and nice showers that you can walk away from barefoot. Ah, home… after six weeks, it’s tempting to let it occupy our thoughts. But there’s still six days of riding, so we try to put those thoughts aside so that we can truly enjoy what’s left of our trip. In the words of Jim Elliot: “Let not our longing slay our appetite for living.” So, here we go!

The ride from Silver Lake took us along the Hart-Montague trail, for the 3rd and final time. We rode this trail to and from the Reneker Family Camp the week before, and were well acquainted with it. It runs through some really cool towns, like Shelby, New Era, and Rothbury (where we came to learn that there’s a massive music festival every year). The path goes along cherry & apple orchards, fields of asparagus and corn, lush forests, and there are several sections where it’s completely covered by a canopy of trees. We stopped—as we did on the previous trips—and gorged ourselves on berries. This week the blackberries were super plump and ripe, and we found a patch that was bursting with them. Definitely a highlight for the day. 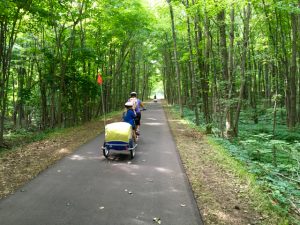 The Hart-Montague Trail: sometimes covered by canopies of trees. 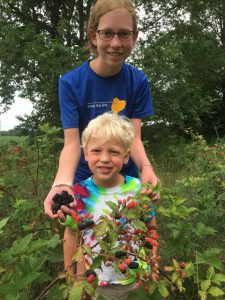 Our harvest of blackberries

We were on the Hart-Montague trail went for 22 miles, then connected to several other bike paths in the North Muskegon area. Out of our 45 mile trip, less than 10 miles were on roads. That’s a good biking day, especially since these trails have very few hills to climb. The Muskegon lakefront path was especially gorgeous, as it took us right along the waters edge for several miles. Caleb counted boats (he lost count after 50 or so), while the rest of us just admired the beauty of the lake.

Our destination was my Aunt’s house, in Norton Shores. With only 4 miles to go, I began to experience some problems with the tandem: sometimes when I pedaled it would go completely free – no matter how slow or fast I pedaled, it wasn’t “catching.” That makes it difficult to move, huh? I tried changing gears, and it might catch again, but if I ever stopped pedaling, I would have the same problem when I started again. Time for another stop at a bike shop.

That would have to happen the next day, because 45 miles is a long way to travel, and we didn’t leave Silver Lake until 10:45 (lots of goodbyes). We arrived at my aunt’s house around 7:00pm, where we enjoyed a huge dinner that included chicken BBQ, hamburgers, banana cake, and other wonderful things… let me just say that we have a whole new appreciation for food after long days of biking!  After dinner we took a dip in Lake Michigan to wash away the sweat and grime from the day’s journey. The rest of the evening we were also able to visit with cousins, play games, and Brittany discovered their library. She read two books that night, I believe.

We’ll see what the next day brings as we seek to fix the bike!