No need to rise early this day, since the bike shop did not open until 10am. So, everyone slept in (good thing, since some of the kids were up reading until who knows when). The bike shop we visited was Breakaway Fitness, in Muskegon, where one of the Service managers, Jeff, took care of me. The bad news: the hub on the back wheel is toast. The hub is the center part of the wheel, and it contains ball bearings and springs that enable it to turn smoothly on its own, yet also “catch” when you pedal. It’s fixable, but they didn’t have the parts, so our solution was to buy a new wheel. A fairly quick fix overall, and we were ready to leave by 12:30.

Our destination that day was Holland, and our route took us through Muskegon, Ferrysburg, Spring Lake, and Grand Haven. It was another beautiful ride; not always along the lakefront, but we got to see plenty nonetheless. My father lived in Grand Haven until he died, so that community has a lot of memories for me in particular. It seems like every Michigan town has it’s own summer festival: in Traverse City has the Cherry Festival; Holland has the Tulip Festival; and Grand Haven has the Coast Guard Festival – which started over the weekend. It was Saturday, so there were a TON of people enjoying the Grand Haven waterfront, but we managed to pick through them without running anyone over. I love the golden beach there, as well as the picturesque lighthouse at the end of the pier. Throughout the entire ride I had the opportunity to tell some of my kids about my Dad and some of our memories together. Obviously, I miss him; it doesn’t matter how old you are, the loss of a parent is a profoundly sad experience that can leave you feeling orphaned in some way.

We battled a lot of hills between Grand Haven and Holland, as we rode on a bike path that went along Lakeshore Drive. Some were really steep! The whole route felt a little like a roller coaster, and it wore us out. We were so glad to be meeting some dear friends at the end of the day: Brent and Karen Renkema. Brent and I were classmates in the Nuclear Engineering program at the University of Michigan, and we were often study buddies. He now works for Steelcase and lives near Holland. They not only came out to see us, but they also brought a truckload of food (again) for us. This trip has helped us come to appreciate the power and blessing of hospitality! Karen is an amazing cook (I remembered that from my college days), and she filled our bellies and our cooler with leftovers. Plus, three desserts: Rice Krispy treats, chocolate chip cookies, and key lime pie. Wow!

It had been 15 years since we’d seen the Renkema’s, and it was so good to reconnect. Our kids thoroughly enjoyed their kids, and did not want to leave. Such a blessing to see them. 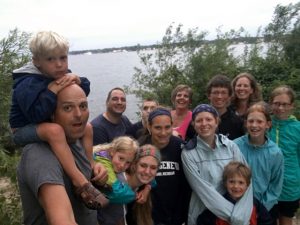 Fun with the Renkema’s at Laka Macatawa (Holland State Park)

We did not have a reservation at Holland State Park, so we counted on Michigan’s policy of never turning away cyclists who need a campsite at their state parks. We were assigned an “auxiliary” site next to a campground. We were in a fenced-in grassy area that was perfect for our tent. However, it did solicit some curious expressions from passers-by. They must have been thinking: “they can’t camp there, that’s not a campsite!” In fact, later that night, after we all went to bed, as two campers visited the playground in the dark, the following rant was overheard:

Had the kid bothered to stop talking long enough to hear an answer to his question, he would have heard Angela tell him that we were indeed home and that some of us were even asleep. However, he was more interested in his loud rant than in what was going on five feet away in our tent. 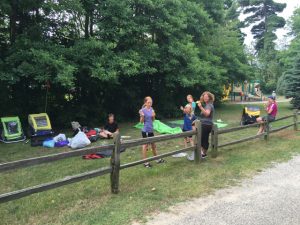 Our “auxiliary” campsite: “What is that family doing over there???”

I don’t know how current I’ll be able to post on this blog, so here’s our schedule for the next few days, until we finally get home!

We’ll be sure to fill in the details soon!